I arrived in Cologne with a huge luggage full of dreams and expectations. After a Bachelor degree in foreign languages and communication, and a six month experience as an Erasmus student in the small German city of Saarbrücken, I was unmovable in the decision of leaving the warm wet air of my small village in the heel of the Italian boot and relocate to the land of poets and thinkers. So I reached Cologne on the first of May, a holiday. It didn’t surprise me to find all shops closed in what was a red day on the calendar, but I was quite astonished to acknowledge that the streets were deserted. Wasn’t Cologne a city with more than a million inhabitants? Where had they all gone? Apparently, the only Einheimische (locals) who bothered to give me a welcome were the two theatre figures Tünnes and Schäl. 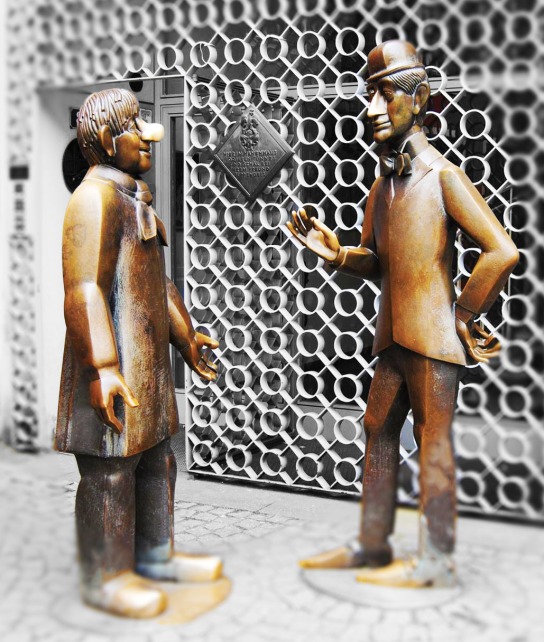 For more information about Tünnes and Schäl click here. (ACHTUNG: the link is in German!)

It would have taken me some time to find out that Holidays truly are holy to the Germans and that walking through the streets on a Sunday, unless there is the most pleasant weather, can turn into a mystical experience of recollection with the surrounding landscape. No, seriously, no one is out there but travelers with their noisy trolleys and  creative minds with their silent dreams.

But I didn’t really mind the general desolation. All my attention was already absorbed by the grandness of Cologne’s first citizen. No, I am not talking about the mayor. I am talking about the second highest cathedral in Europe, the third in the world, the High Cathedral of Saint Peter, alias Der Kölner Dom. 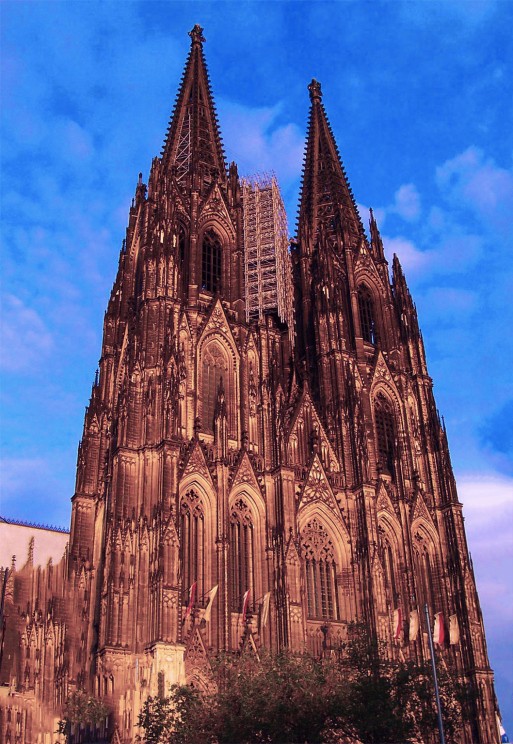 A Roman catholic cathedral, the Dom has an interestingly long and intricate story. Its construction was made unavoidable by the need to properly house the relics of the Three Kings, brought to the city from Italy by the archbishop Rainald of Dassel (yes, they pretty much stole them from Milan). Hence, on 15 August 1248 the foundation stone was laid, and a six centuries long journey begun.

Following the plans of Master Gerard, the works in the style of Gothic architecture proceeded until 1530, when they came to a sudden stop. In fact, mainly financed through the best conceived marketing strategy ever – the sale of indulgences – the project could not proceed after the successful spreading of Martin Luther’s believes had irreparably undermined that very strategy. Together with a general financial decay in the city of Cologne during the Sixteenth Century and a lack of interest for the gothic style in the age of Renaissance, it represented the cause for the three hundred years long sleep of the Dom.

Funds for the construction were raised again in the Nineteenth Century, when Romanticism awoke the long neglected interest for gothic architecture, and as an answer to the waves of enthusiasm accompanying the struggle for the unification of Germany into a politically integrated nation. The cathedral’s incompleteness became a symbol of the unfinished German state itself and of the Reich they wanted to create. Therefore, the effort to finish the Dom needed to proceed in parallel with that of creating a nation. 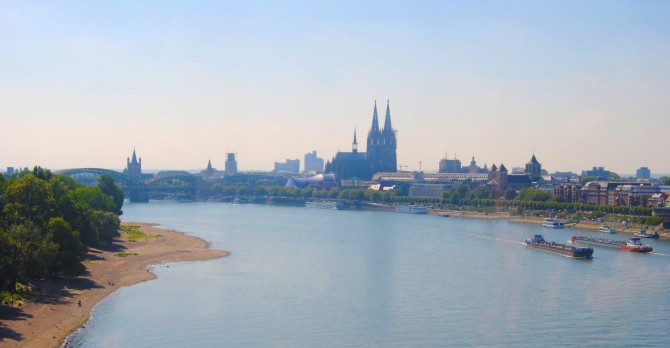 In 1880, when the works were finally completed, Kaiser Wilhelm I authorized the construction of a railway station in the immediate proximity of the Dom and personally travelled to Cologne to celebrate the accomplishment of the enterprise. From that moment on, the cathedral would have been the first citizen to welcome the guests to Cologne.

A citizen, yes, almost a living being, the Dom can also breathe. The black spots on its walls are, in fact, not entirely the result of air pollution, but do also include myriads of bacteria that activate photosynthesis hence producing oxygen. In other words, the Dom is providing its city with better air. 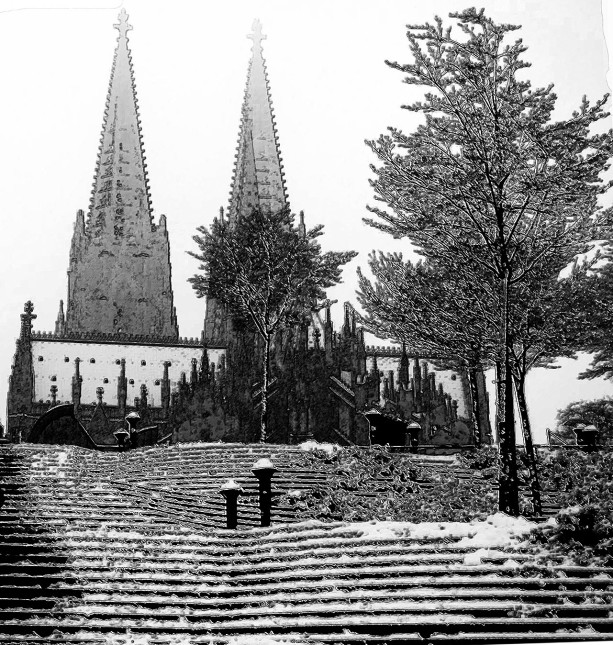 Dragging my luggage across the Domplatte, the wide square before the Dom, I couldn’t help, with every step, but turning my head towards the cathedral. I was flabbergasted by the imposing majesty. The moon was hanging as a bubble in the sky just a couple of centimeters above the Dom’s right spire, a slight movement and that steeple would have pierced it and made it explode. An almost stormy, intractable wind was making a mess of my hair and my thoughts. I can recall the moment as if it were yesterday. In fact, already more than two years have passed.

Only after a couple of weeks I would find out that that wind actually never leaves the Dom, and I naively like to think that it must be the spirit of Master Gerard proudly blowing around its creation. The legend says, that the devil didn’t particularly like the idea of Gerard building another church for his bitter enemy in a city that already had so many, especially if the master was planning to build such a huge one. So the devil did what devils are fond of doing and proposed a pact to Gerard. He ridiculed the ambition of the master’s project and declared that it would have been easier for him to create a canal from Cologne to Trier than for Gerard to accomplish his mission. And as it always happens in literature, the devil won the bet and took the master’s soul in return. Interestingly, Master Gerard really died in mysterious circumstances, inside the Dom, probably falling from a scaffolding.

But Anna, my German friend (or maybe I should call her an acquaintance of mine, for Germans find it absurd to call a friend someone they’ve been knowing for just the last two centuries, they need more time!), soon dissuaded me from my romantic explanation for the incessant wind embracing the cathedral. She promptly went on telling me that the cause was to be found in the jet effect and other related factors. Namely, the Dom is situated in the highest spot in the city, and the general height of the building modifies factors like the speed and the direction of the wind. She then added something about the ruggedness  of the building’s surface and the air exchange determined by the warm air flow from the floor panels of the Domplatte. Anna didn’t even know who Master Gerard was. 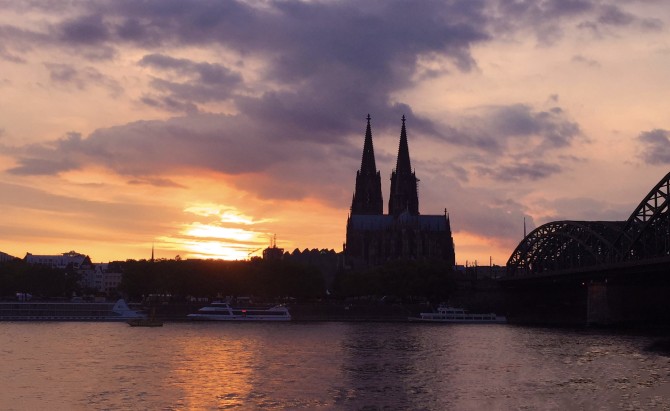 I decided to stop, on that first day of May. I stopped and sat on my luggage to admire the sublime take the form of a Gothic cathedral. I could see the gargoyles as vestiges of a controversial past, I could see the exactness of meticulous mathematic calculation sustaining the building, and I could feel the great emotional impact of its romanticism. I looked at the Dom of Cologne and saw Germany. And, in a moment, I knew that my journey would all be about that wind, about deciding if it was Master Gerard’s spirit or the jet effect. If I would look at the world through the lens of a scientist, make it new through the creativity of an artist , or if I could find the courage to be both.

26 thoughts on “Home is where the Dom is”